How Baseball’s Strangest Game Ever Gave a Broken City Hope

A baseball game in the wake of an American tragedy

The date is April 29, 2015. Baltimore is reeling from the devastating riots sparked by the death in police custody of twenty-fve-year-old African American Freddie Gray. Set against this grim backdrop, less than thirty-six hours after the worst rioting Baltimore has seen since the assassination of Martin Luther King in 1968, the Baltimore Orioles and the Chicago White Sox take the feld at Camden Yards. It is a surreal event they will never forget: the only Major League game ever played without fans. The eerily quiet stadium is on lockdown for public safety and because police are needed elsewhere to keep the tense city from exploding anew.

When the Crowd Didn’t Roar chronicles this unsettling contest—as well as the tragic events that led up to it and the therapeutic effect the game had on a troubled city. The story comes vividly to life through the eyes of city leaders, activists, police officials, and the media that covered the tumultuous unrest on the streets of Baltimore, as well as the ballplayers, umpires, managers, and front-office personnel of the teams that played in this singular game, and the fans who watched it from behind locked gates. In its own way, amid the uprising and great turmoil, baseball stopped to refect on the fact that something different was happening in Baltimore and responded to it in an unprecedented way, making this the unlikeliest and strangest game ever played.

“Kevin Cowherd has written a remarkable sports book that isn’t actually about sports. Instead, it is a reflection on a single professional contest played in silence—a historical anomaly in which an American city, challenged by both legitimate protest and grievous violence that followed the unnecessary death of a man, took a deep breath and played a baseball game in a locked stadium, without fans. And in that empty space, everyone—from the teams’ owners, to the players, to the politicians, journalists, fans, and ordinary citizens—had to contemplate the hopes and fears and the failures and strengths of their city.”—David Simon, creator and executive producer of the HBO series The Wire.

“Dad always used to say, if you hang around baseball long enough, you will always see something new. That was definitely the case when I watched this ball game in an empty Camden Yards. Kevin Cowherd has done an outstanding job capturing the uniqueness of this very odd day in baseball history and all that surrounded it.” —Cal Ripken Jr., Hall of Famer and former Baltimore Oriole. 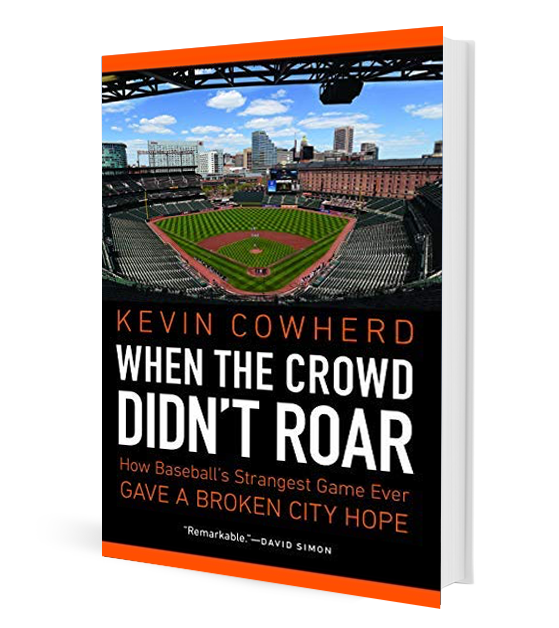